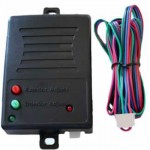 Car Proximity sensor or microwave radar sensor – This is an optional sensor that detects movement either within the vehicle or outside the vehicle close to the side windows. The inside sensor is called an interior radar sensor. The outside sensor is called an exterior radar sensor. Both are similar but have a different function. The interior radar sensor will detect movement inside a vehicle interior, even if nothing is touched. It is perfect for convertibles or as an added level of security to your vehicle’s car alarm system. As an example, if your window is down and someone reaches into the interior to grab something, the interior sensor will detect the movement and trip the car alarm system immediately. The external radar sensor is designed to trip the pre-warn Zone of the the vehicle security system and warn someone away as they approach the vehicle or if they walk by or try to peer in the windows. These sensors may be purchased separately or together as one unit as optional car alarm features.

Additional noise maker like horn honk or air horns. While horn honk can sometimes be substituted for the car alarm siren, it is best to have both if your aim is to cause maximum noise and chaos when the car alarm sounds. Most car alarms are not set up to do both simultaneously without adding some parts, which of course we can do.

Inside siren and strobe light – This causes intense noise inside the vehicle where the thief is headed and the strobe light attracts attention.

Scanning LED – This is a series of LED lights in a line that scan back and forth or in patterns. These come in different colors and can be added to your vehicle security system along with other optional car alarm features, up front on the dash where it will have good visibility when someone looks into the vehicle thinking of breaking in. It basically advertises the fact that you have a car security system and indicates that the security system is armed. In this way, it acts as a deterrent. Someone will think “lets break into the other car that doesn’t have a car alarm”.

Backup battery – This allows for extra protection in case someone attempts to disarm the security system by discharging the car battery, like poking a hole in the car battery from underneath the vehicle or through the front by removing a headlamp. The backup battery supplies power to the car alarm even when there is no power on the main car battery.

Battery Backup Siren – This is a combination of a backup battery and a siren in the same chassis. The advantage of this is that whenever the car’s battery voltage drops too low indicating a discharging battery, the backup battery siren begins to sound automatically.

Hood lock – An additional hood lock can prevent a thief from being able to get under the hood to turn off the siren or jump start the vehicle. Preventing access to the engine compartment can safeguard the vehicle.

Magnetic switch or Pin switch – Extra switches can be added to doors, trunk, camper shells, a pickup bed tailgate door, rear-slider windows in pickup trucks, side doors in trucks or vans, tool boxes on work trucks, storage bins in motor homes, etc. They will trip the car alarm when the switch is opened.