Audio Control LC8i is On Display in our Showroom, Same Day Installation 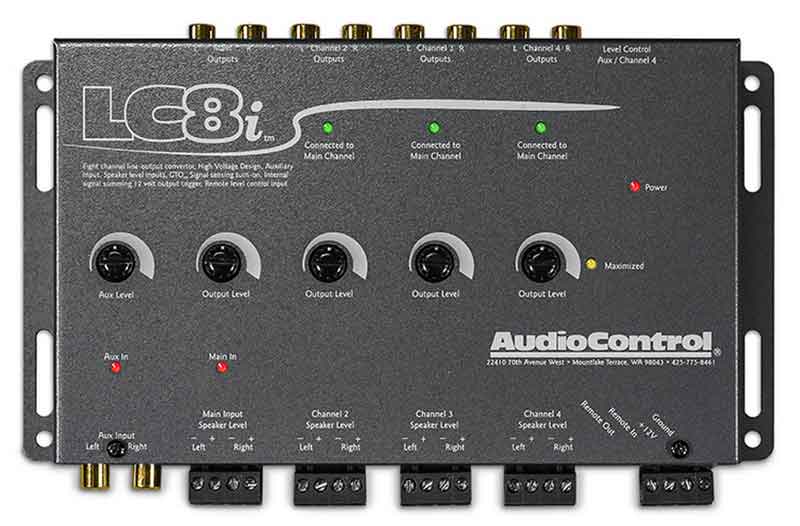 The new Audio Control LC8i is a highly flexible eight-channel signal processor with active input circuitry that accepts speaker-level inputs, of up to 400 watts per channel, from factory-installed source units or amplifiers. It converts them to high-quality pre-amp signals that can then be directed to aftermarket processors and/or amplifiers. This means users will enjoy maximum sound quality while maintaining the use of factory volume and steering wheel controls.

Designed for maximum flexibility, the Audio Control LC8i is 30% smaller than it’s predecessor and it is equipped with an auxiliary input that allows the simple addition of secondary source units like iPods and satellite radio tuners. By tapping the dash control knob, a user can switch back and forth between the main speaker-level inputs and the auxiliary input. Additionally, the multi-function dash knob provides both volume control of the Auxiliary input and level adjustments for the subwoofer output.

The LC8i uses proven OEM integration technology derived from AudioControl’s highly popular LC6i, LC7i and The Epicenter® Plus signal processors. The speaker-level inputs accept high wattage signals (up to 400 watts per channel), either full range or crossed over, and converts them to high-quality pre-amp signals. Signals from factory radios with built-in crossovers can be summed and combined internally to provide a full-range preamp signal. Customers wanting to offer sound quality that is clearly better than OEM systems can also easily add one of AudioControl’s many crossovers or equalizers after the LC8i, providing even greater control over factory signals.

Questions on the Audio Control LC8i?  Stop By Our Store and Talk with a Real Car Audio Expert!
See our local warranty support benefits when you buy from us. Click below.